The history and its special exhibition on the move

The Stukenbrock Social Welfare Center is established in 1948 as a transit camp to house German refugees and displaced persons. Founded out of necessity, it eventually existed for more than 20 years. In the immediate post-war period, it serves exclusively to care for people with special care needs: the elderly and sick, the blind, single mothers with their children, unaccompanied youths, and children for recreational cures. In the 1950s and 1960s, emigrants from the GDR and Aussiedler were admitted.

In January 1948, the British military government, which had used the site as an internment camp from the summer of 1945 until the end of 1947, handed it over to the Ministry of Social Affairs of North Rhine-Westphalia. The ministry provides organizational leadership, while several church and non-church charities are involved in serving the people on the ground.

Caritas, the Evangelisches Hilfswerk (later Evangelisches Johanneswerk), the German Red Cross (DRK), the Arbeiterwohlfahrt (AWO) and the Westfälischer Blindenverein (Westphalian Association for the Blind) are each given responsibility for a section of the camp and certain target groups. A special exhibition at the Stalag 326 memorial site is dedicated to the founding and early years of the Stukenbrock Social Welfare Center.

In the second half of the 1960s, the North Rhine-Westphalia police began to use parts of the site for training and advanced training purposes and took it over completely in the 1970s. Today, it is one of the sites of the Erich Klausener Educational Center of the LAFP NRW.

A special exhibition at the Stalag 326 memorial site focuses on the founding of the Stukenbrock Social Welfare Center. It provides insight into the creation of the camp and documents with numerous photos the time of construction and the everyday life of the people.

The exhibition opened in June 2022 and is shown in a historic building from the time of Stalag 326, which was used in the Stukenbrock Social Welfare Center as a bathhouse and as a theater and cinema hall, among other things.

One reason for the choice of location was the infrastructure and buildings already in place. Of particular note is the “Camp Hospital” from the time of the British internment camp, which was especially important for the care of the sick and elderly. Several exhibition panels are dedicated to the different groups of refugees. Particularly worthy of mention are the so-called “Danish refugees”. Most of them came from East Prussia and had fled from the approaching front to Denmark in the winter of 1944/45, where they were interned at the end of the war. However, the Stukenbrock Social Welfare Center also had a youth home to accommodate “wandering young people”. Mothers with small children were taken in and refugee children were sent to the Stukenbrock Social Welfare Center for recreational cures lasting several weeks. The exhibition focuses on the first years of the Social Welfare Center’s existence, but at the end also takes a look at the accommodation of refugees on the site in the more recent past.

The exhibition was made possible by funding from the state of North Rhine-Westphalia and the city of Schloss Holte-Stukenbrock. Westfalen-Weser AG also supported the project. 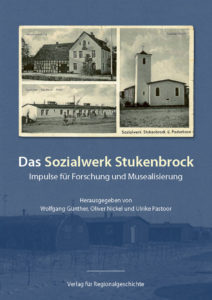 You can order it directly from our bookshop.

to the book shop

Do you have questions about our guided tours?

Please feel free to contact us directly by e-mail at buchung@stalag326.de.

Subscribe to our newsletter and we will be happy to inform you about upcoming events.
Note: The newsletter is only offered in German language.

The exhibition is designed to be mobile

The exhibition about the foundation of Stukenbrock Social Welfare Center is designed as a mobile exhibition and can also be borrowed. This is also possible in the context of school projects. The exhibition consists of 12 roll-up banners and is therefore easy to transport and set up. If you are interested, please feel free to contact us.

We appreciate your support

In order to further research the history of the Stukenbrock Social Welfare Center, we are looking for more documents, pictures and objects that document the history of the Social Welfare Center and the people related to it. We would therefore be pleased if you could provide us with, for example, photographs, letters, cutlery, blankets or other personal items that you own from this period. This can be done in the context of a loan or donation, but also in the form of a reproduction. Another long-term project is to build up a stock of interviews with contemporary witnesses. For this purpose, we are looking for people who are willing to tell us something about their life, their connection to Social Welfare Center and the time they spent there in the context of a life story interview.